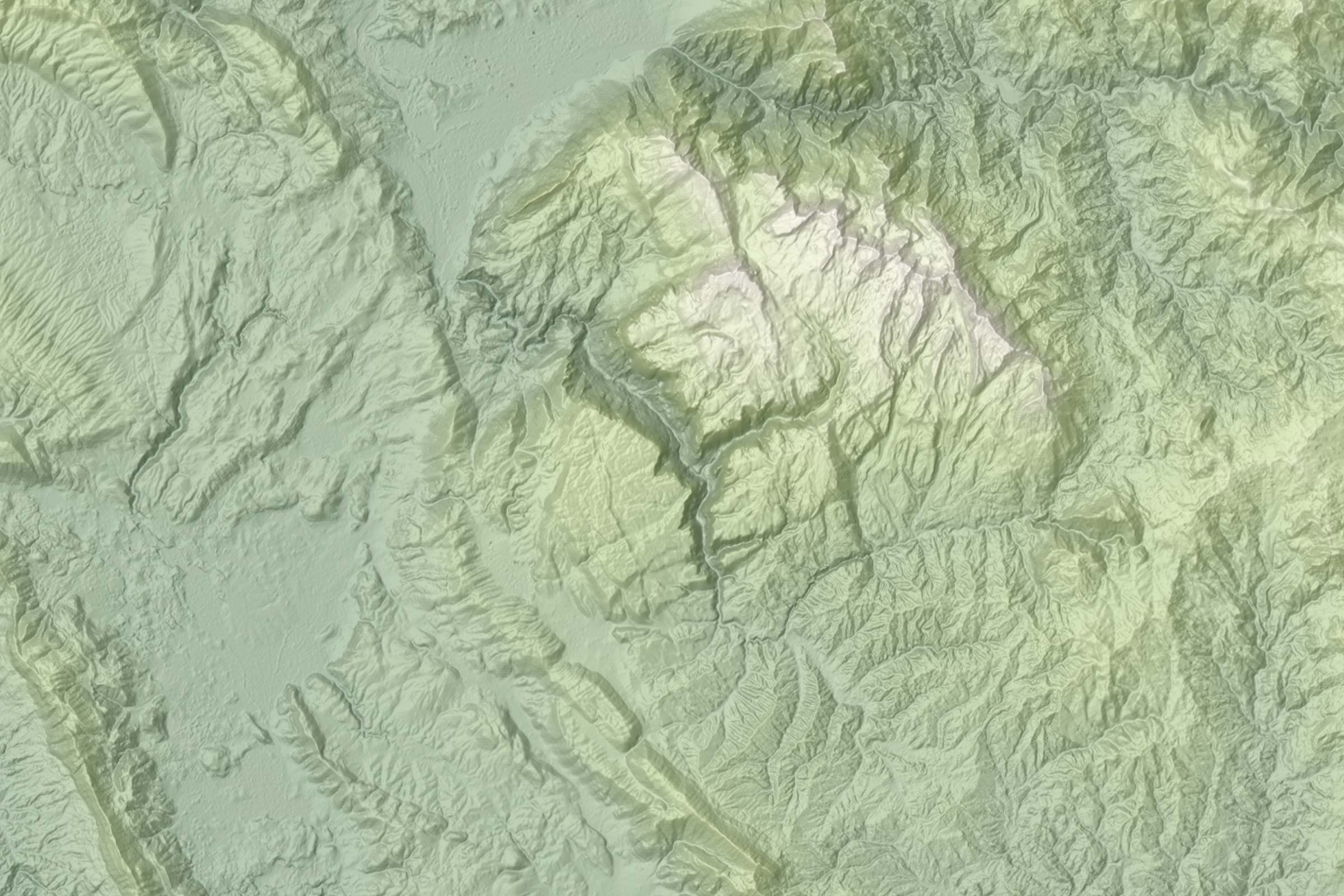 I am relatively new to Google Earth Engine and I have so much more to learn from this wonderful platform. During the process of reading its guides and examples and taking the first steps to writing small snippets on the Code Editor I came up with producing a colorful global terrain.

I was so excited with the final outcome, that I decided to share my process, as well as the entire code to all Earth Engine users. I expect some of you to benefit from this, while some others to identify mistakes and suggest improvements.

A brief summary of the process is that I produce a custom multidirectional hillshade from eight traditional hillshades, upon which I add a slope raster to produce a crisp shaded relief. On top of the shaded relief I add a hypsometric tint, water bodies, the seas and the oceans. The whole process is mostly artistic rather than scientific, hence the capital letters at the word eARTh at the title of this blog post!

At the following paragraphs I analyse step-by-step the overall process and explain what each part of the code does. You may skip all this chatter, if you wish, and scroll to the very end of the post, where I include a direct link to the source code.

First of all, I call the necessary datasets from the Earth Engine Data Catalog, as shown at the following list.

I declare all three datasets as variables, which will be used later at the code.

Among the numerous libraries available on Google Earth Engine, one may find the ee.Terrain library, which includes all the basic algorithms for terrain creation and analysis.

For shaded relief or hillshade, there is the classic ee.Terrain.hillshade, which computes a simple, traditional hillshade out of a digital elevation model (DEM) or a digital surface model (DSM).

As very clearly explained at the Hillshade function specification of ArcGIS Pro: […] “The traditional method calculates the hillshade using an illumination source from one direction using the altitude and azimuth properties to specify the sun’s position” […] And it further specifies:

Since I want to produce a multi-directional hillshade, which will be calculated from more than one illumination source, I must somehow combine a number of traditional hillshades.

To do this, in Earth Engine I create eight different traditional hillshades and I declare them as variables. For input I assign the ALOS variable which calls the Global 30m ALOS DSM and for each one of them I assign an appropriate pair of azimuth/altitude values, as shown in Table 1.

Note that one may adjust the values of azimuth/altitude to meet local illumination conditions. For instance, in my blog post Shadowplay I use very different values from those illustrated on Table 1, adjusted to the local conditions of my area of interest.

The following lines of code produce all eight traditinal hillshades and at the same time they multiply each one of them with their desired weight. I am doing this with the ee.Image.multiply function.

Pay attention to the Image Visualization parameters. I stretch the whole image to its miximum – maximum (0 – 255) and I define a palette. The reason I have to define a palette is for making sure the multidirectional layer will mosaic later on at the process (keep reading).

Note also the .resample(‘bicubic’) argument. This is an instance of ee.Image.resample and I use it to make sure that the derived image will be as smooth as possible (I may also use other methods, like adding a Gaussian Blur for instance, but I want to save as much computing time and effort as possible from the overall process).

Finally, have a look at the .updateMask(0.5) argument. Here I use the ee.Image.updateMask to make the derived image 50% transparent. This is important because later in the scope I am about to mosaic it with another image and I want it to blend somehow properly.

Slope represents the rate of change of elevation for each digital elevation model (DEM) cell, as stated at the Slope function specification of ArcGIS Pro. As a cartographer, I very often use the slope raster to enhance the terrain, for example where it happens to have steep slopes, so it is a good idea to also apply it here at my Earth Engine scope.

So, I create a new variable to store the slope and I apply the ee.Terrain.slope function on the ALOS digital elevation model, as shown at the following lines of my code.

I exaggerate a little bit the image by applying .multiply(2) and at the visualization parameters I narrow down the range of minimum-maximum values (100 – 180). This is an alternative way of filtering the image to not show the flat areas of the slope.

I define a palette with the exact same colors with those defined at the multidirectional hillshade, only this time I change their order. This inverts the slope image and will darken the steeper slopes.

Now I will mosaic the multidirectional hillshade and the slope raster to a single image, which will produce the final Shaded Relief.

I then add the derived Shaded Relief image on the Map. My screen should look similar to Picture 1, depending on which part of the World I have centered my Map.

The Shaded Relief itself is very impressive and I can spend hours staring at it. Still, a little color may not harm. One common cartographic technique is depicting elevation with color, where usually green hues are applied to lowland regions that gradually change to brown or yellow hues as elevation increases and end to white at mountain tops (even though there exist numerous other palette examples)!

This process is known as Hypsometric Tinting. The word “Hypsometric” is actually Greek! “Hypso” (ύψος) in Greek means altitude and “metric” (μέτρο) is a measurement or the process of making a measurement. So hypsometric (υψόμετρο) means measuring the altitude!

So let’s do this in Earth Engine. I pass once again the ALOS digital elevation model to a new variable (var ELEVATION) and at the visualization parameters I define which band will be used (read the dataset’s bands specification).

I then define a color scheme for the palette. I selected a classic color scheme, even though one may select far more creative, crazy combinations. My colors will produce the following linear gradient (Gradient 1), which represents elevation from the sea level to the highest mountain tops.

At the minimum and maximum options, of the visualization parameters, I select the range of values that the colors will be applied. I would expect the maximum value to be the peak of Everest Mountain (8848m) but for some reason the values of that specific dataset exceed this limit (I don’t know why). So I have to adjust the maximum value to the mean altitude of my area of interest, every time I hit Run on my code.

Note also that I apply an image mask on the derived image. This will produce an image with 40% transparency.

Then, I add the Elevation layer on the Map. My screen should look similar to Picture 2, depending on which part of the World I have centered my Map.

For the inland water bodies, such as lakes and rivers, I will use the JRC Global Surface Water Mapping Layers, v1.2 dataset from the catalogue. So, I declare a new variable to hold the water dataset (the variable declared at the beginning of the code) and at the visualization parameters I define which specific band should be consumed.

I give a yellowish/greenish blue color at the palette parameter and then I add the layer on the Map. My screen should look similar to Picture 3, depending on which part of the World I have centered my Map.

The Sea basically represents level zero. Everything above zero is land and everything below zero is undersea. To add the Sea in Earth Engine all I have to do is filter the ALOS digital surface model to only show values less than or equal to zero. This can be achieved with a mask .updateMask(ALOS.lte(0)).

For a more harmonious result, I give to the Sea the same blue color as the one I gave to the water bodies earlier in the scope. I just want a solid color (not a gradient) so at the palette option of the visualization parameters I assign only that color.

I then add the Sea layer on the Map. My screen should look similar to Picture 4, depending on which part of the World I have centered my Map.

The ALOS DSM does not include information underseas. It does not show the depth of the ocean bottom. So I need somehow to fill its no data areas and at the same time to add on the Map the missing information of the bathymetry.

The word “Bathymetry” is also Greek! “Bathy” (βάθος) means depth in Greek language and “metry” (μέτρο) is a measurement or the process of making a measurement. So Bathymetry (Βαθυμετρία) means measuring the depth!

Since this layer is intended to show bathymetry, I have to assign a palette that darkens as the depth increases. I also want this palette to include darker tones of the same blue hue that I assigned earlier to the Sea and the Water Bodies layers.

To do this, I generate a new palette at the awesome Coolors web app, which starts with that hue and gradually darkens. I then assign the colors at the palette option of the visualization parameters of the Bathymetry layer. The produced color scheme is illustrated at the following gradient (Gradient 2).

I then add the Bathymetry layer on the Map. My screen should look similar to Picture 5, depending on which part of the World I have centered my Map.

Note that for the Bathymetry layer I have declared to be false when added to the Map. This means that the layer is being loaded when I hit Run, but it is hidden and I have to manually make it visible from the Layers manager. I do this for speed purposes and because that layer is suitable only for smaller scales.

The last step is to center the Map. I need to define the coordinates (longitude and latitude) of the center of the Map, as well as the zoom level of the initial extent.

This is how I mixed and matched datasets and functions from the Earth Engine library to produce a global terrain, which may be completely useless or enormously useful. It’s up to you to decide! As for me, next time I present an indexed or a classified image, I may blend a little of that terrain to enchance the final outcome.

I have shared the entire code, which is directly accessible from your Earth Engine Code Editor, provided your Google account has been approved for Earth Engine access. Feel free to modify it or further develop it, provided you follow the requirements of its associated licence CC BY-NC-SA 4.0.