How to fold a Layout in ArcGIS Pro 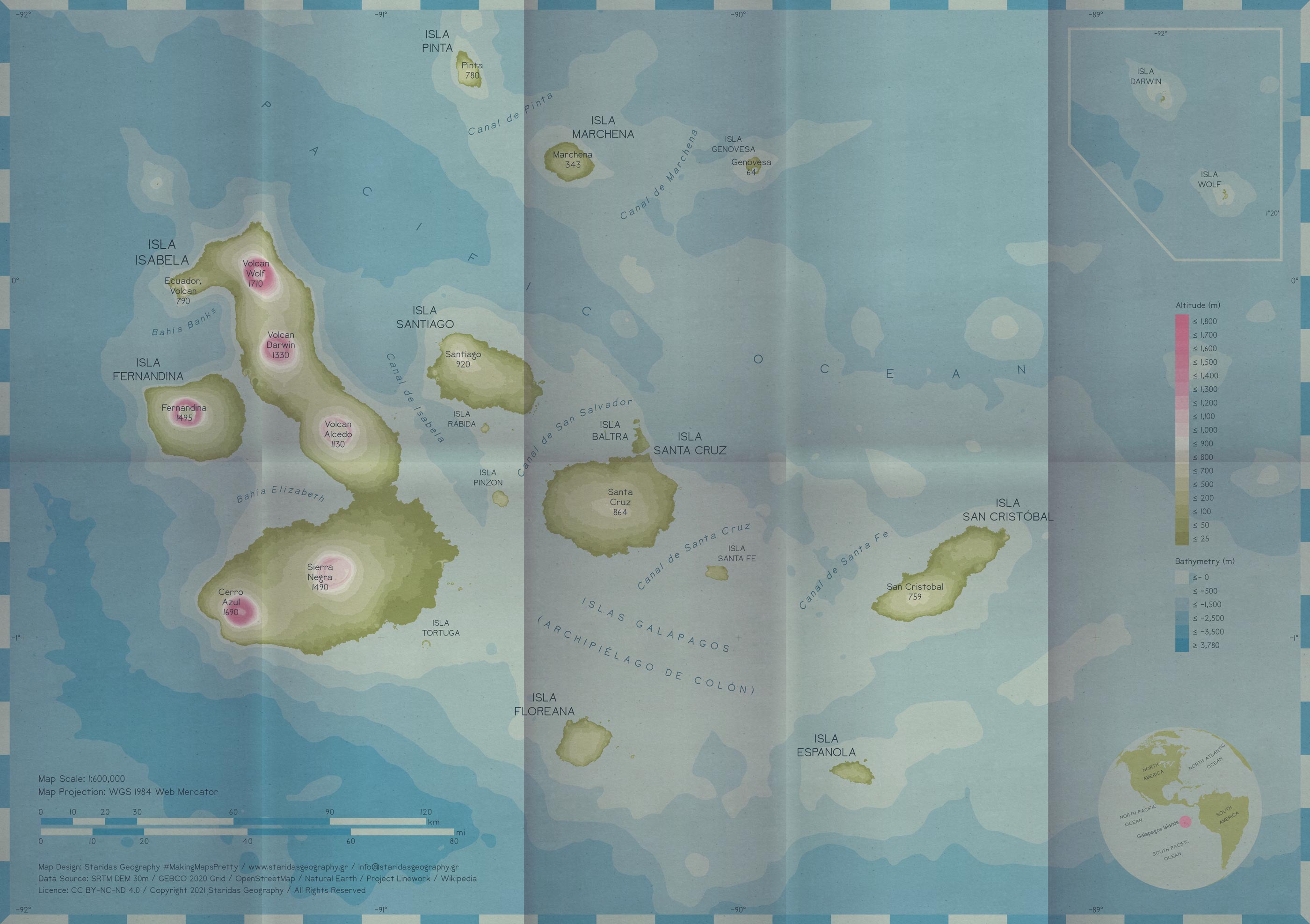 In my previous blog post on How to fold a Map in ArcGIS Pro I describe a step-by-step process to simulate the actual folds of a paper map. The overall process is about creating, editing and styling data in the Map environment in ArcGIS Pro.

But, what if I want to apply this folding effect to the Layout? In most of the cases, after I finish producing the Map, I proceed to the Layout where I add a number of other components, such as a Legend, Scale Bars, Credits, Overview or Supplementary maps etc. If I apply the folding effect only on the Map, the Layout elements will remain “not folded” and the final outcome will not look realistic.

Recently, I felt the need to mentally travel overseas to exotic places and I found myself designing a Pretty Map for the Galapagos volcanic islands (Picture 1).

After simplifying, classifying, styling and labelling all of the data I decided to transfer the map on a Layout, thinking that this would be a cool idea for a print. So I created the Layout where I also added a number of other elements as you may see in Picture 2.

I added credits and scale bars and stuff at the bottom-left, I added a small Globe to serve as reference map at the bottom-right, a funky legend in the middle-right and a supplementary map at the top-right to depict the two tiny outlier islets that exist northwest of the main group of the Galapagos insular complex. I also added a texture overlay to make the whole look-and-feel more vintage and papery (Picture 2).

I couldn’t hold my excitement of the final result, that I proudly posted it on my Twitter and LinkedIn accounts and then I laid comfortably on my couch to rest.

After a couple of moments my phone notified me about this post on LinkedIn where students had produced a map and applied the folding effect and I thought to myself I should have also done it on my pristine, “unfolded” Galapagos map.

Since I was too tired to start Pro again and it was also a bit late (I am a morning person now), I simply “folded” my map on-the-fly with the Pretty Map folding with CSS Pen on CodePen (which, by the way, you may do for yourself following the instructions on the post How to fold a Map with CSS).

And I fell asleep staring at the Pen, thinking ways to transfer the whole folding effect to the Layout in ArcGIS Pro.

A new happy day begins with coffee, music and ArcGIS Pro. In the Layout view, I can simulate the folds with a grid of graphic rectangles. I know that the dimensions of my Layout are Width 68cm to Height 48cm and I want to “fold” it five times horizontally and two times vertically.

This means that each rectangle must have dimensions Width: 68/5 = 13.6cm and Height: 48/2 = 24cm. So in Pro, with the help of the graphic tools of the Layout view, I create ten adjacent rectangles with the given dimensions (Picture 3).

Each rectangle is actually a cell in a grid, which can be indexed. So, I introduce ten Text elements to index the cells (Picture 4).

All I have to do now is to style each individual rectangle with a specific pairing of gradients, which will give the illusion of folding.

In my previous blog posts I am assuming an imaginary illumination source from the left of the map and I symbolize three layers of shade:

I am doing this by blending three different styled layers of the same dataset. But, in this approach I am following now, I incorporate all three layers in the symbology of each graphic rectangle with Symbol Layers (Picture 5).

Every Symbol Layer is then rendered with a Gradient fill (Picture 6). I am doing this separately for each individual graphic rectangle (I know it’s a lot of work, but the final result will compensate, I promise)!

The Gradients, of course, are not accidentally selected. These are the same gradients I have used in my previous posts and I have also saved them in a single Style file in Pro (Picture 7).

I only did this once. I only once created the Gradients and then for each rectangle I picked those three that correspond to the location of that specific rectangle.

If you want to experiment by yourself with the Gradients, at the following Table 1 I present their combination for each cell.

In the Style file I have also saved the combination of the three Gradients for each rectangle, as a single Polygon Symbol. So, it is super easy to just select any rectangle and then select its correspondent symbol from the saved Style (Pictures 8 and 9).

After repeating ten times the aforementioned process, I end up with ten aptly shaded graphic rectangles, which altogether create the effect of folding (Picture 10).

Magic happens when I turn on all the layers below the graphic rectangles. Now, not only the Map itslef, but also all the other components of the Layout participate in the overall folding effect (Picture 11).

To make my life easier, for future Layout “foldings”, I produced a handy Style file for ArcGIS Pro, where I saved the Polygon symbol of each one of the ten graphic rectangles of the folding grid (Picture 12).

I have also saved all the Gradients in the same Style file (Picture 13).

One drawback of this approach is that the Layout environment in ArcGIS Pro does not currently have a Transparency option for the graphic layers, hence I can not control their overall transparency with a click-of-a-button (slider for the case of Pro)!

To adjust for transparency I will always have to go back to the Symbol of each graphic rectangle and alter the Gradients. I know that this may be cumbersome, but at the moment this is the only way (unless an ArcGIS Pro engineer reads this post and desides to introduce transparency options – and blend modes – for the graphic layers in the Layout view – please do, please do)!

Another consideration is the color lightness. For producing the Polygon Symbols I used Gradients that are actually transparency variations of one, sole color. But this color I selected is a little dark, so in another project I might find myself replacing it with another lighter version of it (which means replacing the color on each one stop, on each one Gradient)!

Hue is also an issue. The selected hue of the Gradients, even though is somehow neutral, may not interact properly with the colors of the underlying map. So, depending on the colors of the map, about to be “folded”, it is probable that I will experiment with a more suitable hue (which also means replacing the color on each one stop, on each one Gradient)!

In any case, as uncle Charles (Darwin) said, adaptability is the key to survival. So feel free to play with the Gradients and to produce a more suitable result for your needs.

I have placed the Style File for ArcGIS Pro on my ArcGIS Online account, which you may download and use under a CC BY-NC-SA licence (please respect the licence).

Simulating the folds of a Layout is not only cute, but also practical, especially when I am about to deliver a map which is about to be actually printed on paper.

The real folds on a real paper map separate it in real cells. It is very good practise to arrange all the elements of the Layout in respect to those cells.

For instance, have a look on Picture 14. Specifically, observe the left edge of the Supplementary map, at the top-right of the Layout, which is touching the edge of the fold. This gives a sense of an unbalanced configuration.

I know this sounds like a trivial detail, but look also at the Globe, at the bottom-right of the Layout. It does not seem to be aligned to its supposed center, which is the center of the fold cell to which belongs.

Simulating the folds reveals these minor misplacements that should be corrected on the Layout. Each one of them might indeed seem trivial, but altogether may provoke a harsh asymphony on the final product.

Adjusting the width of the Supplementary map and also moving the Globe a little to the left, produces a much more balanced folded Layout (Picture 15).

Reaching the end of my post, I would like to thank all my readers and followers and to encourage you to fold either your Maps or your Layouts or whatever you think would look better folded (or creased, or wrinly). Remember, those who look sharp are those who didn’t work. Thus, a folded map is a map that most probably worked!

So grab the Style File for ArcGIS Pro (licence CC BY-NC-SA) and start folding. And please share the results. It feels so good when I see folded maps on the internet, knowing I have also contributed to this.