Hike and Bike in Elatou 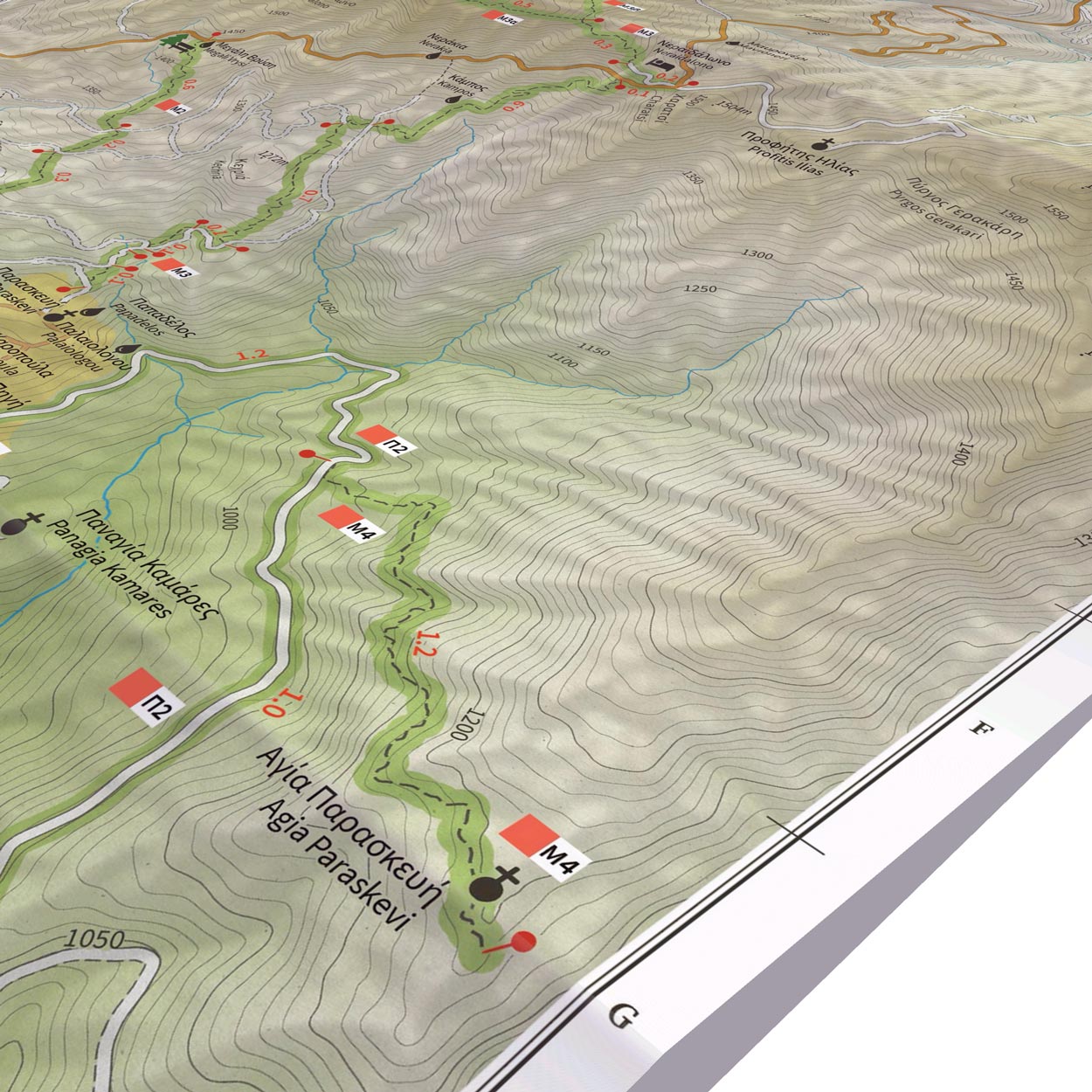 Elatou is a picturesque village at 1,100 meters above sea level, located at the Nafpaktia mountainous area in Central Greece. The Elatou’s Association have created a number of hiking and bicycle routes, all starting from the village’s square and expanding to its breathtaking surrounding nature.

They asked me to design a map to illustrate these routes, which should also work as a navigational tool for the visitors. We agreed to produce one paper map, to show the hiking trails on its main side, as well as the bicycle routes and all other information on its second side.

I decided to design a classic topographic map, in scale 1:10,000 to show the terrain, the roads network, the village and the most important points of interest, including toponyms, and of course to highlight the suggested hiking routes.

I chose a rather monotonous color palette, based on two major colors (green and light brown) to produce a simplistic map with the least possible noise to the eye of the reader, since it was about to be used on field and I gave emphasis to the shaded relief. For this, I created a traditional hillshade, which I heavily filtered with convolution kernels in ArcGIS Pro, as well as with low/high pass filters in Adobe Photoshop.

I manually digitized all roads based on the Hellenic ortho-imagery service, which I validated with aerial imagery from Esri, Google and Bing services. I symbolized the roads network with classes according to each road type and I also gave them a very simplistic symbology.

As a final touch (also super handy for the hiker), I aptly labelled with their length in kilometers all route segments, distinguished by the rotated red pins. The result is a simple, pretty, easy-to-use and to-the-point, large-scale hiking map.

At the second side, I added the same map, slightly modified to only show the suggested bicycle routes around the village. Two map frames were needed for this. One at scale 1:10,000 (same with Side A) focused on the village and one at scale 1:35,000 which was about to illustrate one very large cross-country route.

So, I adjusted the symbology of all data on map to meet the medium scale (1:35,000) and I generalized the terrain to make it suitable for that scale (it was primarily created for scale 1:10,000). The result was to remove the useless details and exaggerate the major landscape characteristics, such as the main mountain tops, slopes and streams. I also adjusted the interval of the contour lines.

At the second side, I also added two graphs showing elevation to distance for every route, created with the graphs capabilities in ArcGIS pro, as well as the front and back covers. Especially for the back cover I created a small-scale overview map of the Central Greece to depict the location of Elatou village.

The graphs and a couple of other details (e.g. map marginalia) were further processed and adjusted with Adobe Illustrator, which I used with the ArcGIS Maps for Adobe extension and AIX files exported from ArcGIS Pro.

Finally, I converted the main side of the map to GeoTIFF format, suitable for the Avenza Maps app and I uploaded it on the account of Elatou’s Association on the Avenza Maps Store, from where you may get it for free.

Once loaded on your phone, or any other mobile device (e.g. a tablet) you can safely walk offline on field, with the aid of the GPS incorporated on your device.

Get in on Avenza Maps Store