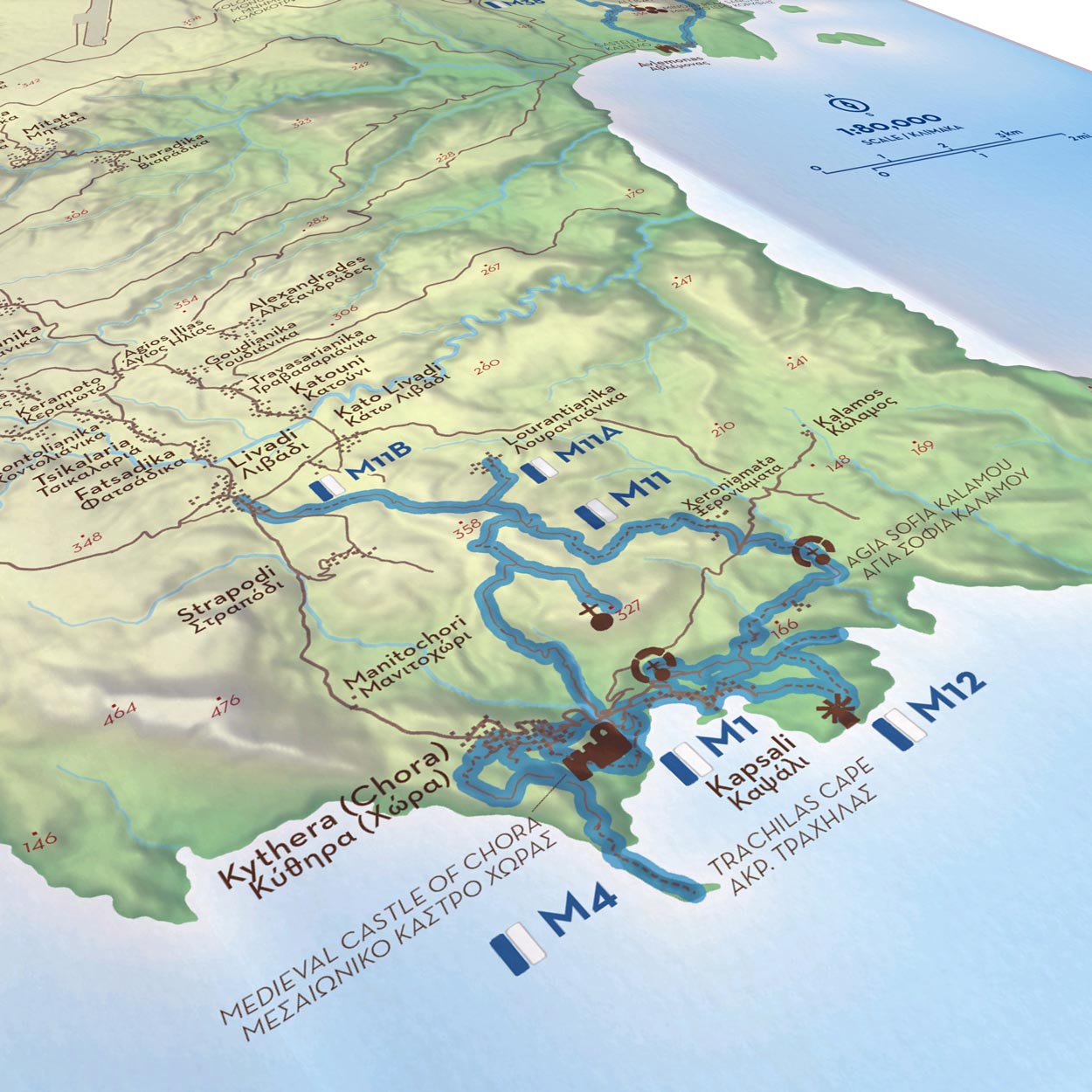 Kythera Trails is a project dedicated to the development and promotion of hiking tourism on the island. The project has been initiated and is being supervised by the Kytherian Foundation for Culture and Development, in cooperation with the Municipality of Kythera, the Domestic Estate Management Committe of Kythera and Antikythera and the Mediterranean Institute for Nature and Anthropos.

I collaborated with Paths of Greece to design the maps for the Kythera Trails. More specifically, I designed a general, pocket-size, informative map to illustrate the entire trails network on the island, eleven detailed hiking maps incorporated on the trailhead signs, as well as the interactive maps on the website of Kythera Trails.

The general map is at A3 size (width 29.7cm / height 42cm). The map of the island in this layout has a scale of 1:80,000. The purpose of the map was to quickly and efficiently depict the hiking trails to the reader. Since the scale is not large, I didn’t want to produce a heavy loaded map. I decided to design something minimal, but at the same time attractive and effective.

So, I created a multi-directional shaded relief, resampled, generalized and smoothed to meet the scale and I added a hypsometric tint to imply for elevation. I didn’t add contour lines, because I thought that at the given scale only noise could add to the map. To give the information of altitude, I only added the summits of the island and their elevation. To complete the terrain I added the main water streams of the island.

To sustain the minimal identity of the map, I only added the primary roads and I symbolized them with the same color and by varying their width, without casing. After all that was not going to be a navigational map, so there was not need for a complete depiction of the roads network with the classic symbology.

As for the settlements I preferred to symbolize them with simple, square markers to give the impression of buildings.

The hiking trails are illustrated with blue highlight below the roads layer and they also have their associated code, whose symbol mimics the actual painted signs on field (the two parallel, blue and white brush strokes).

The island has a large natural and cultural heritage, thus there are abundant interesting locations, almost everywhere. However, with Paths of Greece we decided that it would be far better to only show the main and most significant points of interest, associated with the hiking trails.

All labels are in two languages. Settlement labels are in bold, lowercase, while the points of interest are in regular, uppercase. No other labels (e.g. such as toponyms) have been added on the map, to keep its simplistic look. The final touch was a light blue to white vignette I created along the coastline.

The general map is freely distributed on the island in paper format to all hikers.

The Maps on the Trailhead Signs

The maps on the trailhead sings were much more complicated to design. I had to work in specified layout dimensions and to produce eleven maps, one for each trail, that should adapt to these dimensions. But instead of actually creating eleven maps, I produced one multi-scale map, capable of fitting to every scale!

I then separated the trails in two groups: to those that would fit to a landscape layout and to those that would fit to a portrait layout and for each of the two layouts I created a map series in ArcGIS Pro, based on the multi-scale map. The map series had one page for each hiking trail. This was a huge time saver, since I made appropriate page queries for each page, to filter the information related to each trail.

The map series, for either the landscape or the portrait layout, should fit in the given dimensions, so they should adapt the map scale. For every map scale, I created the appropriate symbols for all point and polyline features of the map.

I created two terrains, one to fit to scales below 1:10,000 and one to fit to scales above 1:10,000. For these terrains I created a suitable multi-directional shaded relied and I added contour lines with intervals appropriate to scale. I didn’t include a hypsometric tint for elevation, since the contours were well labelled. Instead, I added a vegetation layer, which I created myself out of Sentinel-2 imagery.

I digitized the roads network, based on ortho-imagery, and I gave a complete taxonomy with suitable styling, for the reader to separate the different road types. Every page also includes the total of the points of interest for each trail, with labels in two languages and very well designed custom symbols.

These maps are now on the trailhead sings at key locations on every hiking trail on Kythera island. It is worth to mention that the graphic design of the signs was made by Instinct Design.

The final deliverable of the project included eleven interactive web maps, one for each route, on the Kythera Trails website. For this, I used the Google Maps API for JavaScript to create the maps, a couple of custom control buttons and a custom basemap.

I converted all layers to GeoJSON files and I produced a series of custom symbols for all point features. For each point there is an interactive info window, which includes pictures and information.

Every route has its map centered and zoomed on its extent and it only shows the points of interest associated with it. The maps are also adaptable to all screens. Click on any map at the following carousel to go to its equivalent interactive web map on the Kythera Trails website.