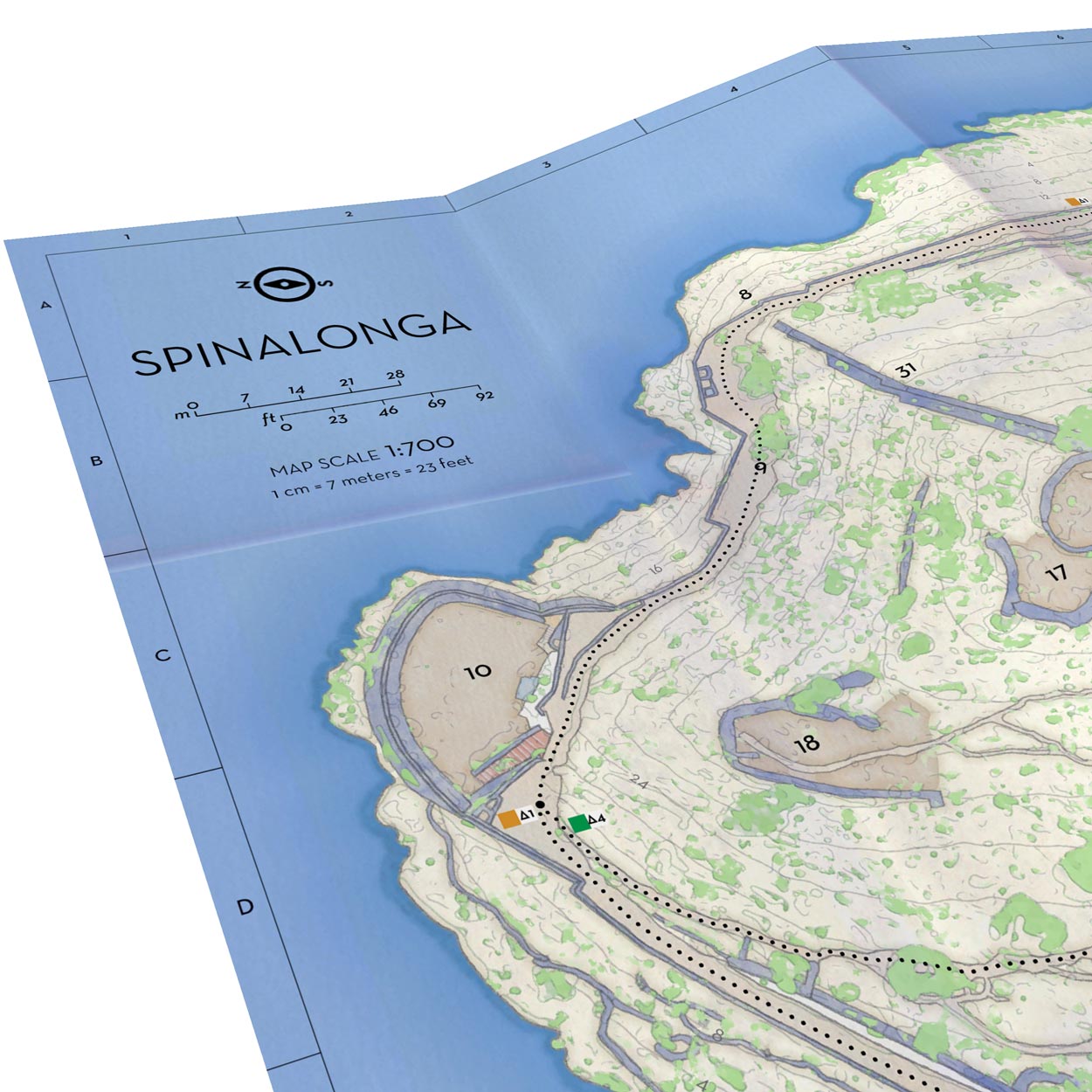 Spinalonga is a tiny, cute islet at the northern part of Elounda Gulf at Crete, Greece. It has a very long history and it is a strong tourism attraction. On the islet, there is the impressive Venetian fortification system that embraces the entire coastline, building remains of the Ottomans, as well as the buildings of the notorious leper colony.

A hike on the islet is easy and short but it offers a magnificent experience and literally a journey back in time, not to mention the amazing view to the blue sea and the surrounding mountains.

The Municipality of Agios Nikolaos, the administrative body of the local government that manages Spinalonga, assigned me the design of a map for the islet. The map should depict the total of the tangible elements of its cultural heritage, e.g. the walls, the gates, the buildings etc, in an artistic, hand-drawn manner.

That was a challenge for me. Not an easy task. I had never before designed a map for a monument of such a magnitude. Not to mention that it should be hand-drawn!

Eventually, I started hiking the islet and collecting all the necessary information. I walked every single alley, footpath or ruined footpath. I even climbed on rocks or jumped on roofs. I believe there is not a single square meter I didn’t go!

At the same time, I was collecting aerial data or any available piece of imagery of some decent resolution. I used the aerial information to produce the basemap of the field mapping. I also printed it at double the scale of the final map, in order to trace it by hand.

Like the classic, old-school method, I spend a lot of days tracing by hand the imagery on transparent paper with pencil. Tracing was facilitated by the data collected on the field.

When done, I scanned the final traced image and I transformed it into a georeferenced raster file in my GIS model. The moment my traced drawing became spatially aware I could plot on it every other kind of information.

I performed several functions to convert it to a vector with filled polygons. I manually assigned attributes to these polygons to distinguish the various land cover elements of the islet. These polygons used to give the digital coloring of the map.

The hand-drawn tracing was not enough to give the desired artistic texture, not to mention the cold, uniform polygon fills. I had to give a more natural texture to the map. For this, I applied a couple of classic remote sensing functions, like the Sobel edge detection and custom convolution filters. These techniques effectively produced some textures, as well as some local shadows.

I also used an aerial image itself, which I symbolized in an appropriate way in order to color elements I could not trace, such as the trees and the vegetation.

Another difficulty I encountered was the lack of information of the third dimension. I could not find any topographic diagrams and I was not allowed to fly a drone to collect altitude myself. I had to find another way to depict the elevation with the best possible accuracy. For this, I used the Z values of the numerous points I collected on the field with my GPS device. I plotted them on the map and I manually created the contour lines.

Finally, I added all the points of interest, as well as a peripheral index grid with a local reference system and I also added the suggested hiking routes on the islet.

It was a long and exhaustive process, but I learned a lot along the way. Now I can’t wait to see it printed!